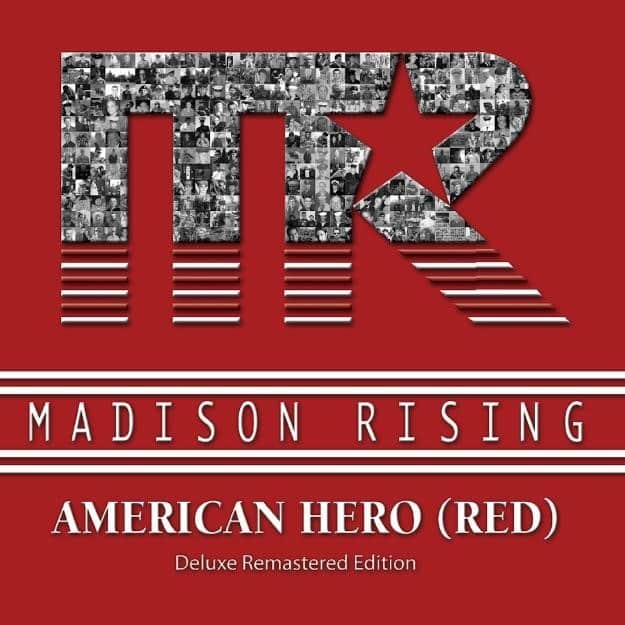 Deluxe remastered version of their best selling American Hero album will include four additional tracks and will further the band’s dedication to our military and first responders to Remember Everyone Deployed (RED)
New York (June 23, 2015) – Just in time for summer, Madison Rising, America’s most patriotic rock band, is proud to announce the release of their American Hero RED album. Completely remixed and remastered to deliver the cleanest and strongest sound possible, the album includes four additional tracks including Amazing America, the band’s powerful rendition of the classic Marines’ Hymn, the hauntingly beautiful Soldier’s Christmas and Madison Rising’s new and mighty rendition of the Irving Berlin classic God Bless America. As with the original American Hero album, American Hero RED is anchored by Madison Rising’s best-selling rock rendition of the Star Spangled Banner. Originally released in the summer of 2012, both the song and video have become huge hits, catapulting the band into the national spotlight and creating one of the most loyal fan bases in rock music history. “Awesome,” “deeply moving,” “chilling,” and “the best ever,” are just some of the superlatives used to describe Madison Rising’s rendition of the song that celebrates what being an American is all about.

Madison Rising, which has recently partnered up with Concerned Veterans for America as well as the Young Marines National Youth Organization is currently embarking on an ambitious seventy-city tour. Upcoming appearances include the opening ceremony of the World Police and Fire Games at RFK Stadium later this month, along with dozens of other shows all over the country, as well as several performances in Japan and South Korea scheduled for September.

The band has previously performed at numerous military, corporate and veteran events, NFL half time shows, the opening ceremony of the 2014 Special Olympics, at NASCAR, the 73rd Annual Motorcycle Rally at Sturgis, 2015 National Police Week on the West Lawn of the Capitol as well as other major venues, and has opened for rock legends Aerosmith, Lynyrd Skynyrd, Steppenwolf, Kansas, Weezer, Slaughter, Toby Keith and others.

Madison Rising is on a mission to make great rock music and send a message that American culture is alive and well. Led by navy veteran and former 8404 FMF Corpsman, Dave Bray, the band promotes the principles of liberty, independence, smaller government and personal responsibility. For review copies, please contact albumreview@madisonrising.com.